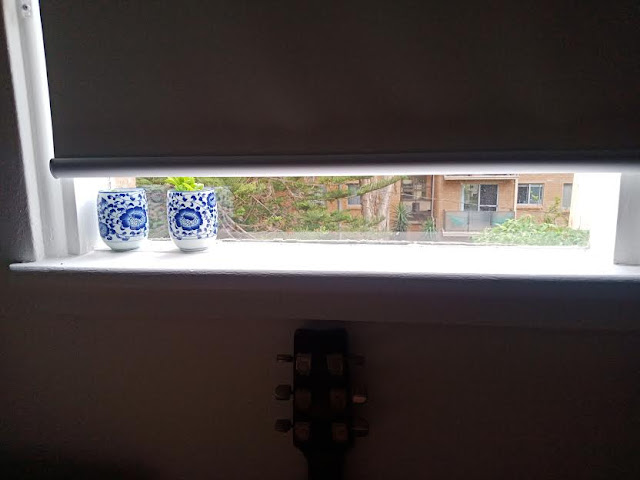 Just seeing this article from 2017 for the first time: How Many Death Row Prisoners are Disabled?

When Kenneth Williams was a child, his father beat him regularly with a belt. One time, he threw Williams against a wall, injuring his brain. Besides the trauma stemming from this abuse, Williams was also forced to witness similar violence against his mother and siblings. In school, Williams was diagnosed with severe learning disabilities, perhaps related to the brain injury, or from exposure to toxic chemicals and drugs. Although three experts examined Williams and determined that he met the criteria for the definition of intellectual disability, which should have protected him, the Supreme Court declined to stop his execution. He died on April 27th.

A Conversation About Climate Change, and Climate Science

Dude: My car's broken.
Me: What's it doing?
D: It won't shift out of first gear.
Me: Dang. Sounds like a transmission problem. Better take it to a mechanic.
D: A mechanic?! I'm not taking my car to some witch doctor!
Me: Witch doctor? WTF?
D: You can't diagnose what's wrong with a car! It's a mystery!
Me: Dude. Mechanics study cars, learn how they work, and learn how to fix them when they stop working.
D: Yeah, right! Like mechanics aren't part of a global scheme to make us all think there's something unnatural about cars breaking down!
Me: Dude. Mechanics fix cars all the time.
D: Mechanics just say they know how to fix cars because they want money!
Me: Mechanics have to eat, pay rent...
D: George Soros wants us all to give our cars to they government and become slaves to the big government highway!
Me: So, you just going to keep driving around in your broken car?
D: I'll adjust! Pretty soon we'll be able to drive all the way across Antarctica in the winter time!
Me: Uh, don't leave the metaphor, man...
D: WARMER WEATHER MEANS BIGGER TOMATOES!!! 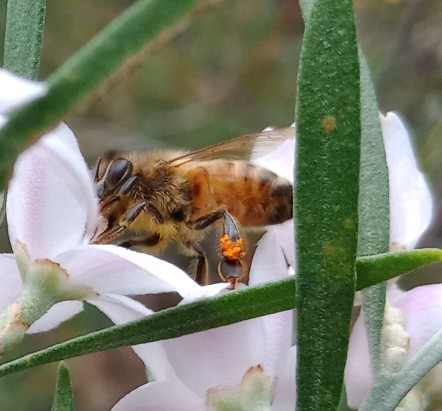 When it was All Together

When it was all together?

When it was all together

We gotta call ourselves “Russia”

When it was all together

They wanted to be that


Was always their dream to be

The biggest in the world

Then it became “Russia”

And you know what?

And so has Saudi Arabia

Done a good job with energy

But we’re now bigger than Russia

The Dowdening of America, Again 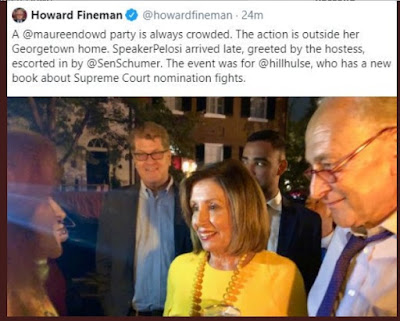 When that tweet was derided by lots of smart people, Howard deleted it, and this morning posted this:


Tonight I tweeted a pic of a Georgetown party hosted by @maureendowd, attended by @SpeakerPelosi, @SenSchumer and DC journos. In the old days it would’ve been a benign big-shot brag. No more. It was viciously ratio’d by left and right. I deleted it. All establishments are hated.
— Howard Fineman (@howardfineman) July 25, 2019

And that, my child, is why America collapsed. Because the ones tasked with holding truth to power were dazzled by the glitter, intoxicated by the proximity to something they’ll never have. To Howard Fineman, and all the other fluffer-stenographers of the ruling class, eat shit. pic.twitter.com/bi5i6Jg3by
— Xeni (@xeni) July 25, 2019

Second volume of posthumous Oliver Sacks, Everything in It's Place: First Loves and Last Tales, reviewed at NY Review of Books.


His childhood nickname was “Inky”; he started writing in journals from his teens and never stopped. He wrote in cafés, in bars, on his bike, even at concerts. He almost never read the journals; they were sketchpads he used to work out his themes, to find his form, to articulate his story.

"To find his mind" might have been just as fitting.
Posted by LT at 8:45 AM 2 comments: 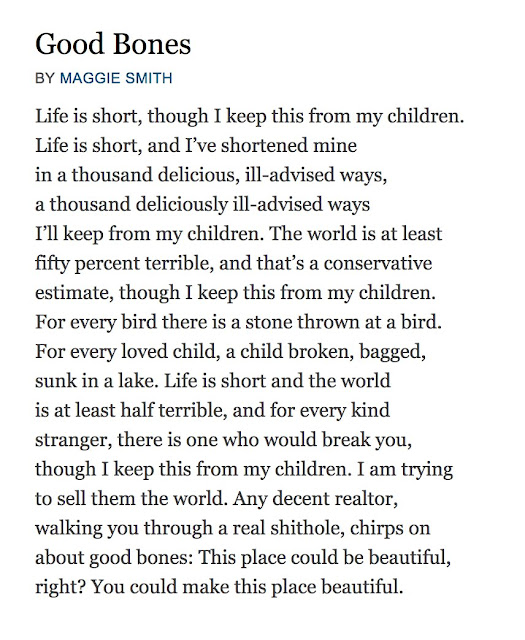 Found here: @TomTomorrow
Posted by LT at 9:21 AM 2 comments:

I can't stand sappy do-gooder posts that purport to offer an injection of hope to people feeling like they've been kicked in the gut.

I'm not a woman or minority, so I won't scold or talk down to anyone with strong, emotional, giving-up reactions to yesterday's election result, but I saw something just now: "Don't mourn over the election. Find a charity and help it now."

That's good, but I've got a better idea:

Maybe all us losers could choose to not let this get us too down, and instead decide to use this loss, and to dedicate ourselves to doing something concrete that over the next four years will make our communities, our country, and our world better. Just a little something. Regularly volunteer in a local homeless shelter, become part of a community outreach program to Muslims or refugees, volunteer in women's shelters, volunteer in group homes for developmentally disabled people - anything. Lots to choose from. Do something doable. Don't give in to the "Oh, what use is this goody-goody shit?" feeling. It's of a little use - and that's better than no use. Make a small community garden with some friends, invite your politically-different neighbors over for lunch on a regular basis, get disparate groups of people together for events like outdoor concerts or frisbee barbecues ("Frisbee Barbecue" would actually make a great band name), start a shopping-for-old-people-who-need-a-little-help group. Do things that focus on bringing communities a little closer together. Eras of division like this one could use that. Let's spend the next four years winning - in spite of losing.

We could call ourselves "Losers For Winning Anyway Cuz Why the Piss Not?" (Maybe someone can improve on this. Just spitballing here.)

Let's all take this on the chin, shake it off, and say "Meh." We can do the world a good thing for four years.

I was trained six months ago or so to volunteer to teach English to recently arrived refugees in Sydney. Just one day a week, few hours of work. Our lives here got a little bumpy around that time, and I used that as an excuse to not do that somewhat challenging thing. Screw that. I'm back in. That's my start.

Important Note: All you winners are welcome to join in, too. With open arms.
Posted by LT at 10:34 AM 1 comment:

Oy. This is happening right now, and it's quite convoluted.

Newsweek writer Kurt Eichenwald has a story up saying - well, a bunch of crazy shit. Primarily: that he has discovered a Russian news service story that carried a mistake regarding Eichenwald himself (Eichenwald is correct on this!); that the mistake proves that a Hillary Clinton campaign-related email that was recently published by Wikileaks was somehow falsified (wrong!); and that Donald Trump has apparently been fed falsified info related to that email—directly from Russia! (Whacky!)

Eichenwald's story is about a story that appeared this morning in the Russian news service Sputnik about an email from Hillary Clinton confidant Sidney Blumenthal to Clinton champaign chief John Podesta (the email actually says it's to "undisclosed recipients," but this if from the Wikileaks Podesta email dump), which was acquired by hackers, and recently published by Wikileaks. Sputnik's story - now deleted - appears to have incorrectly interpreted/understood/transcribed that email, and incorrectly put Eichenwald's words in Blumenthal's mouth.

Then came the money quote: '"Clinton was in charge of the State Department, and it failed to protect U.S. personnel at an American consulate in Libya. If the GOP wants to raise that as a talking point against her, it is legitimate," said Blumenthal, putting to rest the Democratic Party talking point that the investigation into Clinton's management of the State Department at the time of the attack was nothing more than a partisan witch hunt.'

The Russians were quoting two sentences from a 10,000 word piece I wrote for Newsweek, which Blumenthal had emailed to Podesta. There was no mistaking that Blumenthal was citing Newsweek—the magazine’s name and citations for photographs appeared throughout the attached article.

This was, if Eichenwald is to be trused on what the Sputnik story said (I believe him), Sputnik's mistake. It does not reflect on the email at all. (And please note that if the email published by Wikileaks was falsified, or simply made up, Podesta and Blumenthal could and presumably would deny writing or receiving it. They haven't.)

Eichenwald goes on to make a huge conspiracy of how Donald Trump came to get this story - he mentioned it in a speech just today - implying that he was fed it directly from Russia.

I am Sidney Blumenthal. At least, that is what Vladimir Putin—and, somehow, Donald Trump—seem to believe. And that should raise concerns not only about Moscow’s attempts to manipulate this election, but also how Trump came to push Russian disinformation to American voters.

This false story was only reported by the Russian controlled agency (a reference appeared in a Turkish publication, but it was nothing but a link to the Sputnik article). So how did Donald Trump end up advancing the same falsehood put out by Putin’s mouthpiece?

At a rally in Wilkes Barre, Pennsylvania, Trump spoke while holding a document in his hand. He told the assembled crowd that it was an email from Blumenthal, whom he called “sleazy Sidney.”

“This just came out a little while ago,’’ Trump said. “I have to tell you this.” And then he read the words from my article.

The logical, not hair-on-fire, not nutty conclusion about how Trump got that info: the same way other people got it - on Twitter, where it was spread around by tons of people. (Here's a tweet - on the actual email - from October 8. More here.)

Note: In case it's not clear, Eichenwald uses the fact that Trump "advanc[ed] the same falsehood" in the story as Sputnik as proof that Trump was fed the info from his best friend, Putin. And it's not even clear that Trump did that. (Elaborated more fully by Marcy Wheeler here.)


Re the Newsweek story, how do we know Trump was reading Sputnik story & not this viral tweet with thousands of RTs?https://t.co/Cq1lTj2PPO
— Jon Passantino (@passantino) October 11, 2016

And since that tweet has now been deleted, here’s a screenshot of it. Posted at 8:28 am PT pic.twitter.com/5FftXcS7fB
— Jon Passantino (@passantino) October 11, 2016


Update II: Eichenwald is now hilariously claiming to have not said what he did in fact say:

so @kurteichenwald which of these statements is true? Because they can't both be. pic.twitter.com/QUvSz1xTBb
— Adam H. Johnson (@adamjohnsonNYC) October 11, 2016


Gleen Greenwald on this here.

Note, October 12 (Aus): Eichenwald has drastically edited and added to the article in question. It now acknowledges that the Wikileaks email was in fact not doctored. (It's still dumb and silly in every other way.)

Update, Oct. 20: Holy shit. (You've got to read it to believe it. It's so crazy and convoluted it's hard to make sense of. The gist: the writer of the Sputnik story, an American in D.C, says he got the bad info via a tweet. And: he contacted Eichenwald about that. The response: pure craziness. Plus: the writer lost his job at Sputnik. His personal story here.)

LT
NSW, Australia
I'm a writer for a bizarrely successful American non-fiction book series, and a wildly successful singer/songwriter (in my dreams). I live in Australia with Tin Tin.